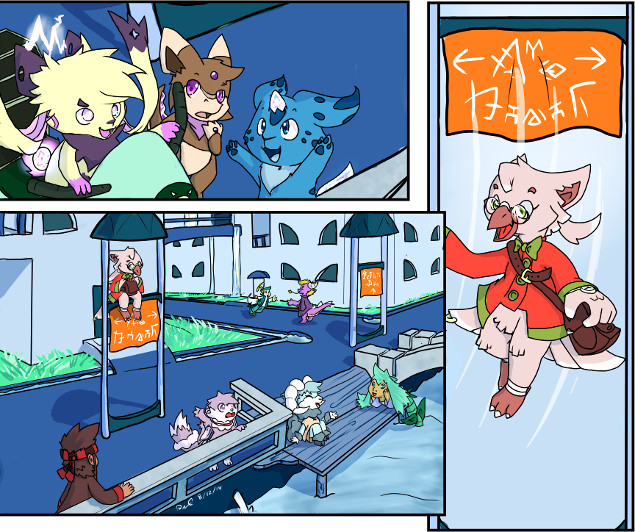 It had been a while since Remias and Pizaru passed underneath the arch signaling the entrance of the city. The duo had decided to spend some time sight seeing while putting together an itinerary of places to visit while they were visiting. They’d passed by exceptionally tall buildings of light blue marble, and long bridges over expansive waterways with boats of all kinds passing beneath them. They’d passed through arches high above the ground and tunnels with lined with solid Aqua mythessence. Restaurants, offices, school buildings…

And yet, there was still one place that eluded them.

“This city is soooo big! Are you sure we’re going the right way to the library?” Pizaru said, circling around Remias with a map in his hands in an attempt to spot the building.

“Well, we’ve been taking detours since we got here.” Remias said, pulling her ventuscycle alongside her as she walked, “but I do agree that we should be heading toward there now.”

They stopped at a crossroads as a myriad number of people passed them by, eager to get to where ever they needed to go. Remias had noted how diverse the inhabitants were as she was passing through the city: lapiken, rinzen, ovesrems, mioki… If there was any one place to meet as many races as you could, this would be it.

Remias then noticed a mail rikkoa sitting on top of a sign post on a street lamp nearby. She had her attention focused on her mailbag as she sorted through the documents inside, periodically looking at her watch with worry.

“Pizaru,” Remias said, putting her ride in standby and letting go of it, “Watch the ventuscycle. I’m going to ask for directions.”

Pizaru bounced on top of the vehicle and put his hands on the handles.

“Leave it to me!”, he said pretending to ride the ventuscycle.

Remias walked up to the street lamp.

“Excuse me?” Remias shouted at the top of the pole. The rikkoa broke her gaze from the bag to look down to Remias.

“Whaaat?” The rikkoa shouted back with her hand to her ear.

“Can you give me directions to the library in this city?”

“I said, can you give me directions to the library in this city???”

The rikkoa paused, before sighing and closer her mailbag. She then hopped downward, her red shirt fluttering in the wind as she swirled down one of the support pole until she got to the bottom. She was a short rikkoa with pink-tinted feathers, tail feathers that fanned out behind her, a small round beak, and a round pair of glasses.

“S-sorry!” The rikkoa said, “I don’t really have the best hearing…”

Remias shrugged. “It’s okay. I’m not in a hurry anyway,” She said as she moved a little closer, “I just wanted to know if you knew where the library was.”

“Oh is that all?” She said cheerfuly, “Which one though? There are a few around…”

“Well, is there one that takes precedence above the rest?” Remias inquired.

“Yes, actually! You want the 3rd Library of Lmennici! It’s the one with the most amount of content as far as I’ve heard.”

“Perfect. I assume you know where it is then?”

There was a minute of silence as Remias waited for the her to speak. The rikkoa had opened her mouth several times to say something but had seemingly decided against , all while fiddling with her bowtie.

Eventually the rikkoa did indeed break the silence.

“…d-do you have a map?” she stuttered in embarrassment.

Remias sighed and turned around to where her ventuscycle was. Pizaru, still ‘riding’ the vehicle, had been surrounded by small children who were energetically playing along with his fantasy as their parents watched in amusement. Remias couldn’t help but find it cute.

“Pizaru!” she called out walking back toward him.

“Can I have the map you have?”

And sure enough, Pizaru had stuck the map, rather haphazardly, through one of the holes in his ears. Remias had a hard time trying to grab it as Pizaru leaned side to side pretending to drive around corners.

Pizaru stopped fidgeting. “Okay, okay…” He said as he moved his ear to Remias so she could reliably grab the map. The rikkoa, who had been standing of to the side the whole time, wasn’t sure what to make of the situation.

“No, no, I have it here,” Remias said holding the map out, “So, where’s the Library of Lmennici again?”

The rikkoa quickly looked over the map. “Weeeell,” she said with an anxious chuckle, “It turns out that library is right over there…!” The rikkoa pointed her large fingers in the direction Remias and Pizaru had came from previously.
Some ways down the street stood a large dull blue building with several column made of a transparent material supporting its opening. These columns were actually hollow and allowed for water to be passed through them, presumably connecting to nearby waterways. Large characters formally spelling out “3rd Library of Lmennici” were carved into the stone above the entrance.

“How did we miss that?” Remias said incredulously.

“It happens,” the rikkoa mumbled.

The rikkoa took one last look at the map and made a gesture toward Remias.

“Well, here’s your map back then,” she said.

“Oh no, you can keep it.” Remias replied. The rikkoa was caught off guard by this.

“Really it’s okay!” Remias smiled. “I think you need it a lot more then I do. We can get a new one at the library anyway.”

The rikkoa’s subtle confusion turned into a wide smiled. “Ahhh~ Thank you so much! This will be such a big help…!”

“I’m not actually sure why you don’t have one in the first place, but at least this works out,” Remias mused.

The rikkoa happily placed the map in her mailbag.

“My name is Endavei, by the way.” she said, “I get assigned all over the place, but I get lost easily in big cities like this…”

“I know what you mean,” Remias agreed.

Suddenly Endavei’s expression turned grim and she quickly put her watch up to her face.

“Oh no, I almost forgot!” She exclaimed.

She took a few steps back, and spread her arms out like the wings that they were. Slowly she started slapping them until they generated enough Ventus mythe-induced wind to lift her off the ground.

“Sorry , I’m uhh… really late for deliveries. So I better get going!” she said, poised to take off, “I’ll try to find you later to thank you properly! So, see you later…maybe!”

And with that, she gracefully took off high into the skylines of Venesque city.

Remias looked on as Pizaru, bored of his roleplaying, floated up next to her.

“What was that all about?” he asked.

“Just getting directions,” Remias said, “you know, the usual.”

“Well then, where’s the library?”

“Come on, I’ll show you,” Remias replied softly as she grabbed ahold of her ventuscycle once more, finally heading off to the coveted building of information.