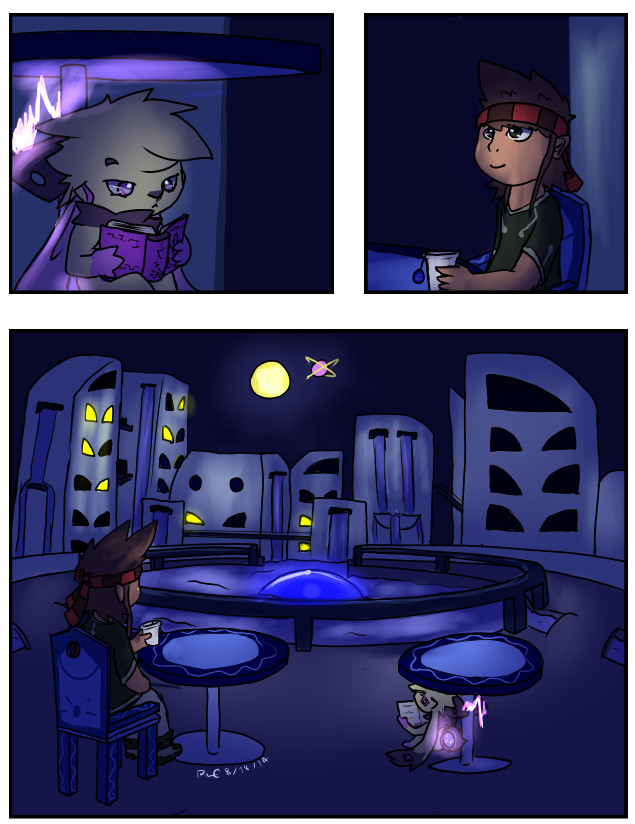 After a full day of exploring the library, Remias and Pizaru finally checked into a hotel quite a ways from where they once were, for three days specifically. That was always the amount of time Remias stayed in any once place, as it provided just enough time to get a feeling for the locale, but still get from place to place in an timely manner. The building itself was quite elegant, as well as large and plentiful in sections. Remias and Pizaru had even needed to cross a short bridge between two building structures high above the ground to get to their room.

After the long walk down many hallways and on once occasion, an elevator that functioned on Aqua mythe (which was much more optimal for lugging around her ventuscycle than the stairs), they’d finally reached their temporary abode. With the keys in hand, Remias slowly opened the door. Pizaru flew of into the room, cutting of Remias before she even had a chance to take her first step inside, and immediately flopped onto the bed.

The room itself was somewhat small, not to mention on the cheap side, but it was a perfect size for Remias’ things. Inside was a desk, a cabinet and a bed with a smaller drawer beside it. A somewhat ornate Lumen lamp sat on top of it, shining brightly. On the far wall were two windows that let in the soft moonlight from Rikuun’s two moons.

“Ahh finally a place to rest my feet~” He said giddily.

“You could always just float you know,” Remias said, finally entering the room with her ventuscycle along side her.

“Well where’s the fun in floating all the time,” Pizaru said laying on his back with his head off the bed, “Running is fun!”

“If you say so,” Remias mused.

Remias leaned her ventuscycle on the wall and untied her luggage. Afterwards, she removed her long coat, revealing a simple greem short-sleeved t-shirt with angular designs near its top, bottom , and at the end of its sleeves. She hung the coat on the back of the chair near a desk. She unloaded the books she borrowed from the library on the desk, centering the largest book, titled “History of Emytheral”, on the middle of the surface. It would be the first book Remias planned to dive into. She also retrieved a a flat device akin to her ID, but several times larger. Turning the device on, it took a second to start up before showing a list of applications for Remias to pick. She picked the option that allowed for the imputation of information, and prepared to dive into her research.

But before that, she took a purple book from Pizaru’s bag and tossed it at him.

Pizaru was in no position to grab the book as it sailed passed him into the wall.

“Thanks a lot,” He said, rolling off the bed to pick up the book.

Remias shrugged. “So, a book on general Tornitrus techniques huh?”

“Yeah! I figure that I might as well do some practicing while I’m here,” he said, opening the book to the beginning.

“Just make sure to stay away from water. We don’t want to have to pay any hospital bills due to electrocution.”

Remias turned back to her desk, preparing to do her work, and yet hesitated anyway.

“…Speaking of water, I think I’ll have some tea before I work.”

She got up from her chair, and started toward the door.

“Care to join me Pizaru?”

Pizaru looked up from the book.

“Yeah, sure,” he said, hopping of the bed without closing his book. Remias held the door open as he scooted past, before going through it herself.

It was quite another walk to get to the place which sold beverages. They’d gotten there just in time, as after Remias had received her tea (Pizaru insisted he wasn’t really thirsty), the vender had shut down for the day. Afterwards, Remias suggested visiting one of the hotel’s outside balconies, one of which she spotted near their room. Pizaru agreed. He’d never actually taken his head out of his book the whole time.

After their third and final long trek through the hotels hallways, they finally arrived at the public outdoor balcony. They were the only ones around.

The balcony was shaped like a half circle, with most of it taken up by a small pool on its outer rim. In the middle of the pool was a large chunk of solid Aqua mythessence gleaming under the moonlight like sapphire. It appeared to be there just for show. Small waterfalls originating from somewhere above them gently fed the pool, and continued to fall even further down when it reached the north edge of the platform. There were also two small tables behind a railing that stood besides the pool.

“It’s a nice night,” Remias said taking a seat at a table.

“Mhmm…” Pizaru mumbled as he sat down next to the opposite table’s leg.

Remias took a sip of her tea, and just relaxed. The two sat idly, taking in the cool night air, the sound of the water moving near her, and the large moon Nsalia, and its companion moon Menulisc hanging over them.

“I suppose it would be a good time to go back to our room, huh Pizaru?”

There was no answer.

Remias looked at where Pizaru was, to find that he was no longer there. She looked around before decided that he had left early. Remias threw her disposable cup in the trash, and proceeded to head back to her room.

Remias opened the door slowly. As she creeped back in, she noticed Pizaru in his basic form, asleep on the bed. The book he was reading was draped over him like an extremely small cover. Making no noise, Remias swiftly moved to him, taking the book and coving him with a small blanket. She then returned to her desk, and returned Pizaru’s book to the pile.

Sitting down, she finally opened the history book that had been left along for all this time. Taking her research device, she dived into her research, going at it long into the night…
—————————————————————————-
And thats all of Day 1 of Venesque City! Thank you for reading this far~