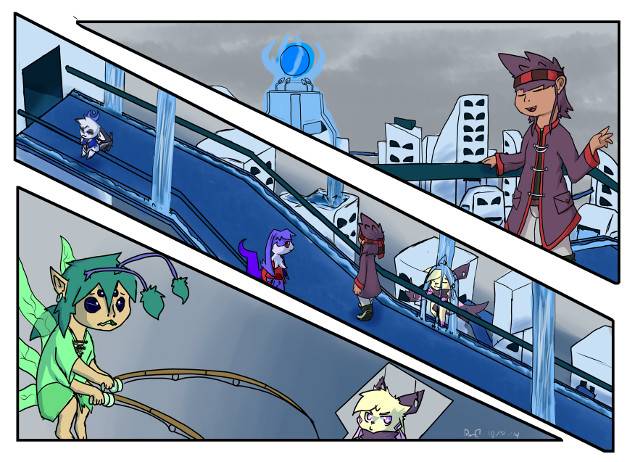 Waking up was quite an ordeal for Remias. Pizaru had gotten up early and took it upon himself to roam the hallways while Remias was still asleep. It took a while for Remias to actually find him, asking the other tenants about his whereabouts along the way. In the end, she’d spent most of her morning on finding him, finally succeeding after finding out he’d stopped by a room belonging to a kamypon not to far from where their assigned room was. The two had been chatting without a care in the world, unaware about Remias’ long search. Remias was understandably annoyed about the whole thing, urging Pizaru to return to their room to start the day properly. Pizaru had wanted to keep talking, but the kamypon was much more savvy about the situation, and cut the conversation before it developed any further, leaving Pizaru with no choice than to go back with Remias. Although she was glad he was okay, she warned him not to disappear so suddenly like that again. Pizaru, still feeling energized from his talk, nodded his head as they walked the short distance back to their room.

After the eventful start to their second day in Venesque, the duo had set out into the depths of the city. Their path took them high above the ground to the walkways suspended between various buildings. Earlier, Remias had planned to eat breakfast at a somewhat well known restaurant; one of many to be sure. Unfortunately it was no longer an appropriate time for breakfast, but Remias had decided that lunch would be just as good.

After a long period of walking, Remias decided to take a small break to observe the surroundings. They had to be at least fifty feet above the ground by now.

“Look at that,” She said, pointing to a large skyscraper with a huge sphere of solid Aqua mythessence being suspended above it. There were gallons of water gushing from its surfaces, traveling along the bridges and balconies of the city until it reached the ocean below.

“That’s the Central Aqueduct. It provides water for the entire city,” she continued, “The large orb of Aqua mythessence there took many years you cultivate before the city was as advanced as it is now. It’s an incredible sight isn’t it?”

“Mhmm!” Pizaru agreed. He’d placed himself under a small cascade of water, delighting in the cold feeling it brought him, his precarious position non-withstanding.

“Maybe you’d want to enjoy that coolness from the other side of the railing before you fall over,” Remias warned, uneasy about where he was.

Pizaru stood up, the water still pouring on his head.

“Don’t worry about me! I can float a little, remember?”

“A little bit of floating will save you from terminal velocity. Come on, you’re making me nervous.”

“Alright,” Pizaru said, stepping from underneath the stream and shaking himself dry. His fur became fluffier as it dried.

“Hyup!” he grunted as he vaulted over the railing. Unfortunately his right ear, still damp from his shower, managed to cling to the railing, causing Pizaru to spin underneath the rail and careen of the side of the platform. Almost immediately there was a splash and an exclamation from someone who no doubt had gotten a face full of water.

Remias rushed to look over the side of the rail, trying to spot where Pizaru had fallen. She didn’t have to look for long before a particularly confused effeymi, who had been fishing with two rods at once, rose with Pizaru stuck on both of his lines. Pizaru was rather miffed.

“I told you” Remias said mockingly.

“Oh yes, sorry,” Remias said as she went to remove the hooks from Pizaru’s prongs.

“I thought fishing illegal in this city!” Pizaru said as Remias fiddled with the hooks, still upset that he’d been caught like this.

“Recreational fishing is allowed as long as you don’t actually kill any fish,” Remias replied, freeing Pizaru from the fishing rods. “Good thing too, or you might have fell even further.”

“I can float…!” Pizaru insisted.

The effeymi reeled the lines of his rods back in. “We’ll a’least no one got hurt. Sorry f’catching him though. I usually don’t discriminate about what gets on my rods.”

“Oh it’s quite alright. We should be thanking you for preventing Pizaru from becoming an electric pancake!”

The effeymi and Remias chuckled as Pizaru stewed about the joke at his expense.

“I can float!!!” He shouted, sparks angrily passing between his prongs.

“Yes, Mr Karmingil, would you happen to know if The Tidal Wave restaurant is around here?”

“Ah do; Jus’keep going down this path, an’turn right at t’crossroads. Should be somewhere around there.”

“Thank you very much.” she said as Karmingil nodded and returned to his fishing post.

Remias looked around to see Pizaru back under the stream.

Remias thought for a bit. “Do you want to go off on your own then? Since you’re so eager to jump off of bridges.”

Pizaru stuck his tongue out. “Yeah though, I guess that would be cool.”

Pizaru successfully bounded over the railing to Remias as she opened her pocket and took out a map and a pencil.

“If you come across anything interesting, make sure to write it down, and don’t loose the map,” she said handing the items to Pizaru. He stuck the map in the small hole his ear, adjusting it to make sure it didn’t fall out.

“Will do!” He said, moving back to the top of the railing. “I guess I’ll see you later then!”

Remias nodded as Pizaru once again swung on the rail, launching himself into the depths of the city with wild abandon.

Remias shook her head, and continued walking down the path, smiling the whole while.