Arts — Drawing has been one of my most prominent interests ever since my first scribble on the wall, up to the point that I let my parents convince me to take up Architecture because of that interest. However, it was in this time when I realized that it was more of just a simple hobby than career material for me. It can be very time consuming, and as time became less and less of a luxury, I guess I just grew too impatient to improve myself (although I still try to whenever I can) and just stick to my comfort zone.

My tools of the trade are: pencils and pens for traditional art, Paint Tool SAI and GIMP for digital art, and Inkscape for vector graphics. I’ve played with water colors in the past but gave up on it since it’s just a very hard medium to control. I also do some graphic design and pixel art here and there, mostly as UI’s for websites, software, and games that I make.

Craft — An absolutely time-AND-money-consuming hobby that I’d like to do occasionally, especially when the mood hits, is crafting stuff. My mom used to reprimand me for keeping a lot of “trash” in my room back when I was a kid, but I guess I just had this habit of keeping stuff I could possibly recycle even if I didn’t know what that was yet. I kind of lost that habit though, mostly because It can crowd my drawers and cabinet real fast. The most I made was a jewelry box, and a time capsule that I’ve never opened since 2009!

Sometime in my life, I happened to find a new crafting hobby by accident— It started with the simple thought of wanting to breathe life into drawings, and the closest thing I can think of to do that is to turn them into plushies! 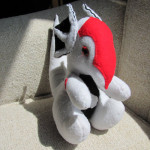 This one is my first, and still best creation by far! It’s a birthday gift I sent off to a special someone far away of her dragon character. Took about four straight days to make, and I had some help sewing up the eyes and head marking, but it was all worth it! 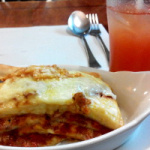