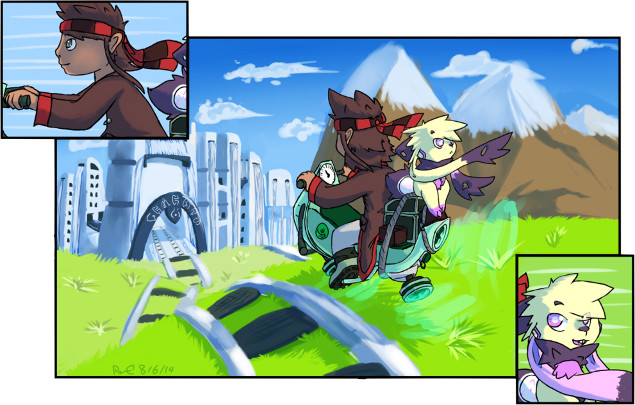 The field seemed to stretch on endlessly.

Beneath a golden summer sun, the ground was covered in a sea of green with nothing much to break it up besides a small stream every now and then.

A ventuscycle was leisurely riding above a dirt road beside a set of well traveled train tracks. It’s owner, a human with a black and red long coat tucked underneath a couple of boxes filled with supplies and edibles, was in a state of trance while she mindlessly drove in the direction of where a town was supposed to be. She had black messy hair which was only partially tamed by a stripped red and black bandana. A rectangular sheath subtly swayed on her waist, underneath the coat as she road closer and closer to her destination.

Sitting on top of the boxes behind her was a second passenger: a rather rabbit like Tornitrus-bound Overdrive Aeon who was facing the direction in which they’d just came. He had yellow and black fur, and pink inner ears with a patch of black at the ends where there were also two small holes big enough to stick a small twig through. He had two protrusions on the back of his head that resembled an electrical plug, that occasionally passing electricity between each other as the Aeon thought. A Tornitrus marker spun slowly on his bushy tail.

This aeon, in contrast to his friend, was much more alert.

“Nitchi Fields sure is nice, huh Remias?” The aeon said with a small smile on his face, “It’s so big and… well peaceful!”

Remias turned her head slightly to acknowledge the Aeons remark. “Yes, it definitely seems that way Pizaru,” she said. “We’re lucky my ventuscycle can hover over all these streams though. I would hate to get wet if I didn’t need to.”

“I wouldn’t mind getting wet, especial when there’s no cloud in the sky to block the sun…”

Pizaru shifted his position to face adjacent to the side of the ventuscycle. Leaning close to Remias’ back, he continued, “Besides, how are you going to avoid getting wet in a city that’s practically powered by Aqua mythessence?”

“I’ll just be very careful. Maybe I’ll get an umbrella while I’m there.” Remias said as they passed over another small stream. Pizaru looked as the small animals that were drinking from the lake paused to look at the floating entity that had passed them.

“An umbrella isn’t going to protect you from falling into a waterway,” Pizaru joked.

“You aren’t thinking of pushing me in are you?” Remias asked unseriously.

“Well you know- ah, look. You see there in the distance?”

Remias halted her ventuscycle at the top of a hill. The position gave an exquisite view of the scenery around them, although in the moment they were only focused on one thing.

Indeed, in the distance was an island with a shimmering collection of pearly white buildings on top of it. Streams of water were gushing from them endlessly into the sea below it. Before it stood a long bridge on which an even set of train tracks were laid out, splitting into different directions once they reached the main land.

“It sure looks… cool,” Pizaru said with a longing in his voice.

“It looks to be about an hour away. Maybe even forty-five if we go fast enough. Then you can have all the water you want.”

“Well, what are we waiting for?” Pizaru floated onto Remias’ head and pointed his finger in the direction of the Aqua-bound city. “Let’s go let’s go!”

“Alright alright” Remias chuckled as she moved her ventuscycle from it’s stationary state. “Hold on to something.”

There was a moment of stillness before the ventuscycle blasted of in a flurry of high speed gales toward Venesque City.

The first of many ‘story’ pictures that will explore a given place and its many quirks and characters. This first place will be a little weird as i both relearn how to write, and also figure out what style I want to draw the pictures in haha.